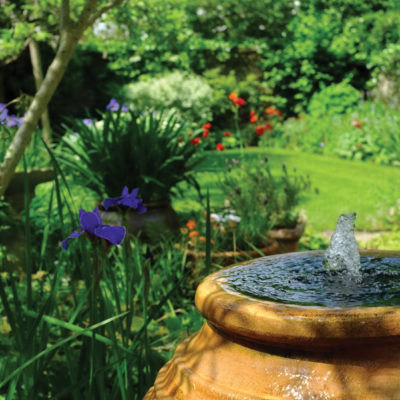 Landscape Associates Ltd refreshed this urban garden in Teddington with an emphasis on biodiversity and in particular attracting wild birds.

During the initial site visit, the team from Landscape Associates Ltd was struck by the abundance of wild birds in this small urban garden, largely due to its proximity to Bushy Park. The garden demonstrated a high level of biodiversity and so the team’s primary objective was to maintain and enhance this within its design. The existing borders featured several plants that held winter form, such as Rudbeckia, Symphyotrichum and Hydrangea quercifolia, and it was obvious from subsequent site visits that additional species of this variety should be introduced to further encourage biodiversity. With plans to extend the property, the owner initially instructed Landscape Associates to leave the area adjacent to the house as it was. However, the client later decided not to pursue these plans, and the team was invited to redesign the space in a second phase of works. Fortunately, this had little impact on the first phase, other than some replanting.

When producing concepts for Phase 1, Landscape Associates focused on creating areas to encourage wildlife through the introduction of new plants, while also retaining many of the garden’s nature-rich existing trees and shrubs. In addition to devising a wildlife-friendly planting scheme, the team spent time sourcing a suitable water feature that could be used by the birds.